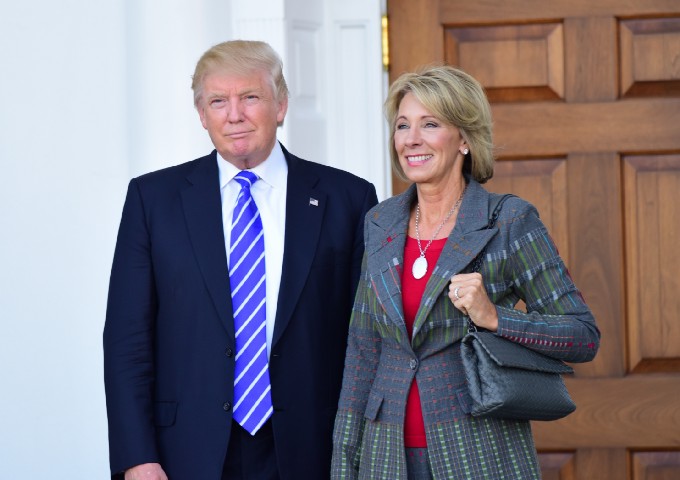 On January 17, the Senate Committee on Health, Education, Labor, & Pensions (HELP Committee) will hold a one-day confirmation hearing for President-elect Trump’s nomination of Betsy DeVos for Secretary of the U.S. Department of Education.  Although, like other Trump-nominees, DeVos’ ethics committee review and record are still incomplete, what we do know about her raises serious red flags for LGBTQ students and parents. Family Equality Council is concerned about DeVos’ nomination for Secretary of Education, because her ties to substantial financial contributions to extremist anti-LGBTQ organizations threaten to undermine the wellbeing of LGBTQ and other historically vulnerable students. Disentangling Betsy DeVos’ own financial contributions from those of her close family and the foundations they control is complex, which is why we are calling on the Senators conducting her hearing to pay close attention to these questions. DeVos’ decades of advocacy around school vouchers is also troubling and raises further concerns.

Ask the Committee Members to Raise these Questions

As Secretary of Education, DeVos would oversee the nation’s public education system; lead the federal agency whose duty it is to ensure that all students have educational opportunity, regardless of who they are, how they identify, or where they come from; and implement and enforce civil rights laws and policies that protect LGBTQ and other vulnerable students from discrimination and harassment at school. Yet, DeVos, who has no personal or professional experience in public education, has spent her career and considerable wealth advocating to funnel taxpayer dollars from public schools to private and religious schools, which fall outside the purview of important civil rights laws such as Titles IV and IX of the Civil Rights Act, the Individuals With Disabilities Education Act (IDEA), and the Americans with Disabilities Act. These private educational institutions would receive federal tax dollars, but they would not be subject to federal laws and policies designed to protect students – the very laws that the Department of Education is tasked with enforcing.

LGBTQ students and parents are particularly vulnerable under a DeVos-headed Department Education, as is evident from the millions of dollars DeVos’ family, and possibly the nominee herself, have donated to extreme anti-LGBTQ organizations and political campaigns. For example:

Disentangling DeVos’ own financial contributions from those of her close family and the foundations they control is complex. What is clear, however, is that there is a coordination of resources among very wealthy family members to advance an anti-LGBTQ agenda that is deep and far-reaching, including promoting “conversion” therapy – a practice which is extremely harmful to LGBTQ people and has been rejected by every mainstream medical and mental health organization in the U.S.

At a time when the country is deeply divided and bullying and harassment of LGBTQ students continues to plague our educational institutions, it is imperative that our Secretary of Education supports all students, regardless of who they are, where they come from, or where they attend school.

It is critical that DeVos’ record is thoroughly examined and fully vetted. Senators on the HELP Committee must pose questions which get to the heart of these issues so that we can better understand DeVos’ positions and the impact she would have, as Secretary of Education, on LGBTQ students and parents. Over the last eight years we have made significant advances that protect the rights, dignity, and safety of all students: these advances are now at stake.

Please email members of the HELP Committee today and ask them to closely scrutinize Ms. DeVos’s record and ask one or more of the following questions:

Submit these questions to the Senate HELP Committee