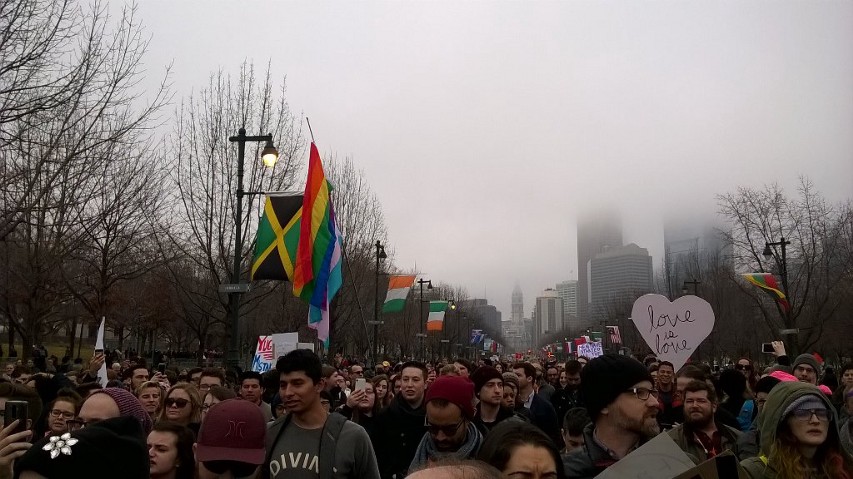 I spent last week at Creating Change, a massive LGBTQ movement conference filled with soaring moments of inspiring speakers, heavy stories of the struggles our community still faces, and an overwhelming sense of solidarity. It was amazing. With all these highs and lows, my favorite memory will be of how this hoard of LGBTQ activists intersected with the Philadelphia Women’s March on Saturday.

In a smart move, the LGBTQ Task Force (organizers of the conference) build the Women’s March into the conference agenda. It was THE thing to do on Saturday between 12:30 and 2:30 pm. I chose to meet up with a local friend and head to the march when it officially kicked off at 10 am. People were gathering before 8 am. I spotted them as I walked to my friend’s place for some pre-protest quiche and muffins. I chant louder with a full belly.

With my friend, I marched with the tens of thousands of early risers. Like in many other sister marches across the world, the mood was celebratory, passionate, and peaceful. I’ve been to many a protest. I’ve been one of six protesting bank foreclosures and one of hundreds of thousands protesting climate change. I’ve protested in multiple continents and languages. The Women’s March in Philly felt entirely different, I could only describe it as an ‘entry’ protest – something that brought in many people who ordinarily don’t come out to march. Everyone needs that entry point, so I was thrilled to see so many first-timers and seasoned activists together. At the same time, with so many new folks it was eerily quiet as we started to march. I quickly remedied that with chants and soon everyone was raising their voice.

After about two hours, I made my way back to the conference hotel. I was hungry and my toes were numb. Lots of people were also trickling away from the main stage and heading off to find food and bathrooms or to return home. I assumed the Creating Change contingent was somewhere in the massive crowd. I was wrong.

As I neared the hotel, I saw a huge crowd of people getting ready to kick off a march. To my delight, it was the conference contingent. I jumped back into the group and marched a second time. What a different experience the second time around! People heading home now lined the street on either side of us. They all stopped what they were doing and cheered us on. Entire restaurants, now filled with tired marchers, erupted and cheered. And we chanted. Boy, did we chant.

But, I will never forget the single most inspiring moment of the march and the conference. A family with two moms and three kids were marching next to me. One mom led several chants and the whole nearby crowd joined in. In a moment of quiet, the middle child – around nine years old and white – began a “Black Lives Matter” chant. Big sister, a young woman of color around twelve, gave him the most heart-stopping smile of love and ruffled his hair.

This is why I march. I march for the multitude of intersectional identities that make up the kaleidoscope of LGBTQ families – and for the powerful love that underlies it all. It’s a love that has faced down legal barriers, rampant discrimination, isolation, and fear. The love our families have for one another and for the fight for justice and equality has changed history. Seeing that family – I know that love will fortify us in the years to come. Together, our families will shape the future.