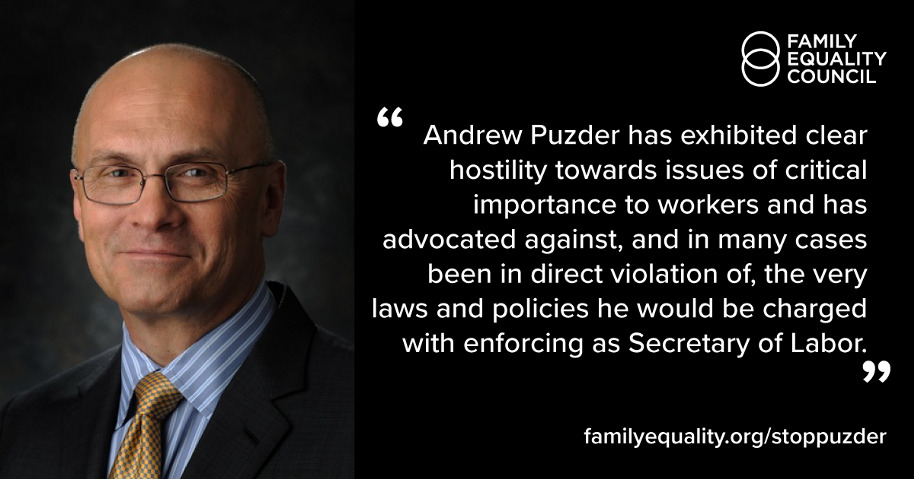 The mission of the United States Department of Labor (DOL) is, “To foster, promote, and develop the welfare of the wage earners, job seekers, and retirees of the United States; improve working conditions; advance opportunities for profitable employment; and assure work-related benefits and rights.” Over the past eight years we have seen great advances in DOL’s mission of ensuring the health, safety, and fair treatment of the 150 million workers in the United States – including workers who are LGBTQ. The next Secretary of Labor will be charged with setting priorities and overseeing the Department’s resources, and will be instrumental in ensuring these hard-won advances are protected and that federal labor laws are enforced.

Andrew Puzder, CEO of CKE Restaurants and President Trump’s nominee to serve as Secretary of DOL, is the wrong person for this critically important job.

At the foundation of a happy and healthy family is economic security – the ability to earn a living and the economic stability to provide for a dependent partner and children. LGBTQ-headed families experience poverty at a higher rate than families headed by non-LGBTQ parents. Single LGBTQ adults raising children are three times more likely to live near the poverty threshold, while married or partnered LGBTQ couples raising children are twice as likely. LGBTQ families of color and those headed by lesbian couples are even more vulnerable because women and people of color face significant wage gaps when compared to their straight, white, male counterparts. Additionally, nearly 40% of African-Americans and nearly half of Latinos lack access to paid sick days. Given that African-American and Latino LGBTQ couples are more likely than their white counterparts to struggle economically, families of color are even less likely to have access to benefits such as paid sick and family leave. (Data from the Williams Institute.)

Equal access to employment opportunities and benefits is also key to economic security for working families, yet there is still no federal law that explicitly bans discrimination in the workplace based on sexual orientation or gender identity. While some states offer employment protections to LGBTQ workers, the majority of states do not have protections against such discrimination, leaving 50% of LGBTQ people and their families vulnerable to being fired simply for bringing their whole selves to work. This patchwork of state laws means that tens of thousands of children currently live in jurisdictions without explicit, inclusive, and comprehensive job protections for their LGBTQ parents.

Family Equality Council works at all levels of government to ensure that LGBTQ workers have equal opportunities in employment, are paid livable wages, receive equal pay for equal work and have access to employee and workplace benefits and protections for themselves and their families. For the better part of 8 years, we worked alongside the Obama administration, the Secretary of Labor, and hundreds of dedicated DOL employees to expand protections for working families including expanding protections under the Family and Medical Leave Act (FMLA) and advancing policies that promote fair wages, equal pay, paid sick days, and paid family and medical leave. LGBTQ workers and their families have greatly benefited from these pro-worker policies, but with his nomination of Andrew Puzder, President Trump has signaled his intention to roll back these hard-won advances.

Andrew Puzder has a long history of being anti-worker. Most specifically he has:

It is also worth noting that during Puzder’s 16 years as CEO of CKE Restaurants, the company has committed numerous violations of wage and hour and safety laws enforced by DOL and has been hit with more federal employment discrimination lawsuits than any other major U.S. hamburger chain.

Andrew Puzder is a terrible choice for working families. He has exhibited clear hostility towards issues of critical importance to workers and has advocated against and, in many cases been in direct violation of, the very laws and policies he would be charged with enforcing as Secretary of Labor. His shameful record speaks for itself and it is for these reasons that we call on the Senate to reject his nomination to lead the U.S. Department of Labor.