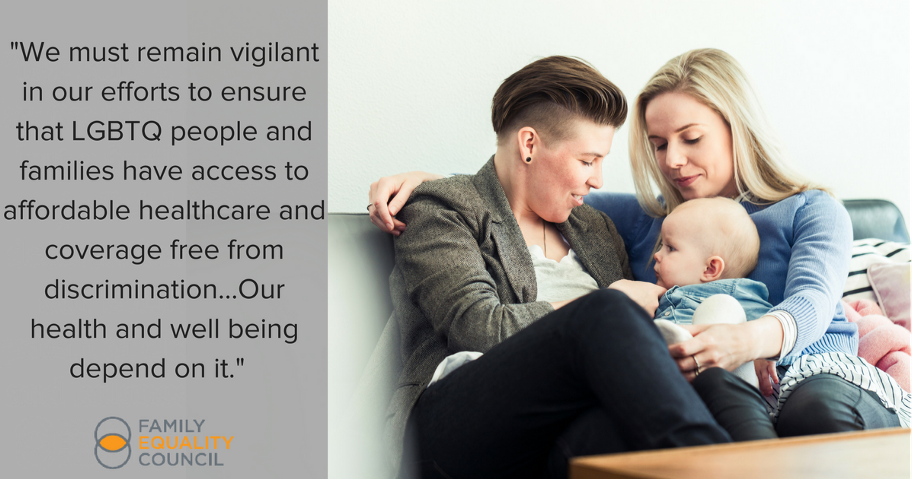 This week is LGBT Health Awareness Week, and recent events underscore that we cannot afford to be silent about healthcare. Last week, which marked the seventh anniversary of the Patient Protection and Affordable Care Act (“ACA” or “Obamacare”), President Trump failed in his first major attempt to repeal and replace the ACA.  For now, as House Majority Leader Paul Ryan conceded last Friday, the ACA remains the “law of the land.”  While this was a huge victory for LGBTQ people and anyone who believes that affordable healthcare should be a right for everyone, the battle over the ACA is likely not over. We must continue to resist efforts to repeal the ACA – we must remain vigilant in our efforts to ensure that LGBTQ people and families have access to affordable healthcare and coverage free from discrimination. Our families rely too heavily on the Medicaid expansion and access to services Provided by Planned Parenthood to let Congress take these vital programs away.

While the ACA may not be perfect, it has gone a long way in providing millions of Americans, including LGBTQ people and their families, with access to affordable healthcare. Since the ACA was enacted, over 20 million Americans who were previously uninsured have gotten coverage. More than 90% of Americans now have health insurance – the lowest rate of uninsured Americans in history. Although LGBTQ people have historically had higher rates of uninsurance due to discrimination and barriers to accessing healthcare and insurance, a recent survey by Center for American Progress shows that the uninsurance rate amongst LGBTQ people, including low- and middle-income LGBT individuals, has significantly decreased under the ACA.

As explained more fully in our guide for LGBTQ parents and same-sex couples, the ACA provides several important benefits and protections that make obtaining insurance and accessing healthcare easier and more affordable. For example, the ACA provides access to affordable health insurance through tax credits and state insurance programs that lower insurance costs; removes annual lifetime limits on coverage; prohibits the denial of insurance coverage due to pre-existing conditions such as cancer and HIV; allows young people to stay on their parents’ insurance plan until age 26; prohibits insurance companies from charging higher premiums based on gender; expands Medicaid eligibility in many states to provide greater coverage for low-income Americans; and, provides Medicaid recipients with free preventative services and discounts for certain prescription drugs. In addition, Section 1557 of the ACA prohibits discrimination in health coverage and care based on race, color, national origin, sex, age, or disabilities, and a final rule issued last year by the Department of Health and Human Services’ Office for Civil Rights makes clear that Section 1557’s prohibition of sex discrimination includes discrimination against LGBTQ people. This is significant given the historical discrimination that LGBTQ people have faced in accessing healthcare and coverage.

Despite last week’s victory, we must remain steadfast in our efforts to ensure continued access to affordable healthcare free from discrimination for LGBTQ people and our families. Given that dismantling the ACA was a key campaign promise of many, the fact that repeal efforts failed in the House is a true testament to the impact citizens can have when they engage in the political process. Since last November’s election, we have seen Americans raise their voices in record numbers and last week proved that we are having an impact. Even when the odds are stacked against us, when we show up, stand up, and make our voices heard our elected officials listen. We must continue to resist and participate in government and at the grass roots level. However, we must not only push back on any future efforts to dismantle the ACA, we must resist efforts by the Trump Administration to roll back the protections that the ACA affords LGBTQ people and our families. Last week was proof that the fight is far from over.

While attention was focused on the House’s failed attempt to repeal and replace the ACA, President Trump quietly appointed notoriously anti-LGBTQ activist Roger Severino to head the Office for Civil Rights (OCR) at the Department of Health and Human Services (HHS). Like many others tapped by Trump to fill key government positions, Severino’s beliefs and life’s work are contrary to the very purpose of OCR – to ensure that all Americans have equal access to healthcare.

Severino’s appointment is especially concerning for LGBTQ people and families, as he has spent much of his career actively opposing our civil rights including marriage equality and access to healthcare.  Most recently, while Director of the DeVos Center for Religion and Civil Society, Institute for Family, Community, and Opportunity at the anti-LGBTQ think-tank the Heritage Foundation, Severino repeatedly denounced and actively opposed OCR’s implementation of Section 1557, which as explained above espouses the ACA’s non-discrimination protections, and called for a wholesale repeal of the ACA.  Severino attacked the Obama Administration’s enforcement of civil rights of LGBTQ people, calling protections based on gender identity a “radical social experiment” and “abuse of power,” and argued that civil rights protections should not extend to transgender patients. Severino asserted that the ACA’s extension of protections to transgender people gives them “special privileges” that disadvantage people of faith, forces doctors to provide “controversial” transition-related medical care and surgeries, and requires the wholesale acceptance of a “radical new gender ideology.”  Severino also denounced Section 1557’s prohibition of discrimination against women who have terminated a pregnancy, and has called for defunding of Planned Parenthood.

Severino’s extreme views are not only out of step with the mainstream, they are in direct conflict with his job as Director of OCR, which includes investigating civil rights complaints and enforcing non-discrimination laws and policies including Section 1557. This is especially concerning, given that OCR and the full and non-discriminatory enforcement of Section 1557 are key to ensuring LGBTQ people and other historically marginalized groups can lead healthy lives, free from discriminatory barriers to accessing insurance and healthcare. Already, we are seeing changes in OCR’s website which signal that LGBTQ people may be at the top of Severino’s agenda; given his history, it would not be surprising to see a shift in OCR’s enforcement of nondiscrimination protections for LGBTQ people. We must push back against any such efforts to roll back protections for LGBTQ people. Our health and wellbeing depend on it.

Family Equality Council and Center for American Progress, The Affordable Care Act and LGBT Families: Everything You Need to Know

Center for American Progress, Why Repealing the Affordable Care Act Is Bad Medicine for LGBT Communities

Center for American Progress, Open Doors for All