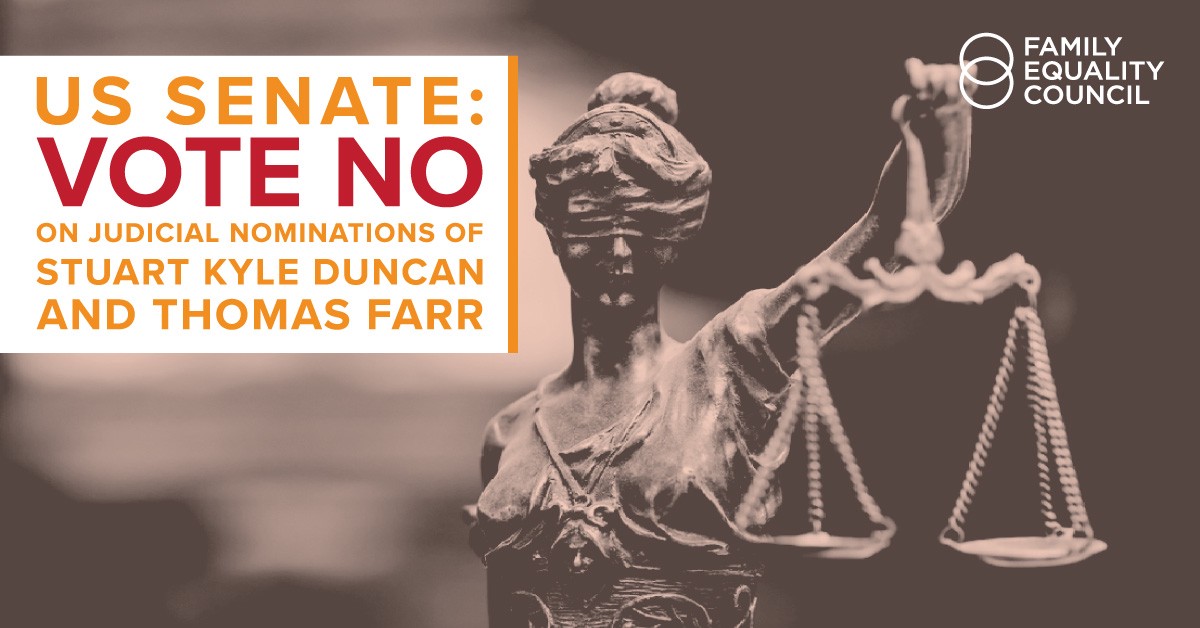 Today we need you to call your U.S. Senators and urge them to VOTE NO on Kyle Duncan and Thomas Farr.  These nominations could come up for a vote as early as this week.

Throughout his career, Mr. Duncan has sought out opportunities to oppose civil rights for the LGBTQ community, often targeting lesbian and gay parents and transgender people in particular. His pursuit of limiting the rights and opportunities of LGBTQ people and other marginalized groups renders him unqualified for this position.

Today we need you to call your U.S. Senators and urge them to vote NO on Kyle Duncan and Thomas Farr.

Over many years, Mr. Duncan has actively pursued his interest in undermining the legal recognition of same-sex couples and our families. He organized amicus briefs against the constitutional right to marry for same-sex couples in Obergefell v. Hodges. He defended the state of Louisiana against a challenge to its ban on same-sex marriage and in its refusal to recognize same-sex marriages from other jurisdictions. He also defended the state of Alabama against a challenge from a lesbian mother whose parental rights were stripped away by the state in V.L. v. E.L. In our “Voices of Children” amicus briefs in the Obergefell v. Hodges and V.L. v. E.L. cases, Family Equality Council outlined numerous examples of the harms that children of LGBTQ people have experienced due to discrimination against their parents. Thankfully, Mr. Duncan’s legal efforts did not prevail in any of these cases, as they were based on beliefs and positions that are well outside of accepted scholastic, scientific, and legal thought.

Mr. Duncan has also worked aggressively to defeat equal opportunity protections for transgender people. He chose to do this by representing North Carolina legislators Phil Berger and Tim Moore — the drafters of the House Bill 2 (HB2).  Mr. Duncan filed expert declarations which relied on “junk science” describing transgender people as delusional, views contrary to the positions taken by bodies of medical professionals such as the American Medical Association and American Psychological Association.

While representing the authors of HB2, Mr. Duncan chose to also defend the Gloucester County School Board which implemented a discriminatory policy singling out transgender students and requiring them to use “alternative, private” facilities separate from their peers, a policy later struck down by the Fourth Circuit Court of Appeals.

Thomas Farr, a nominee for the United States District Court for the Eastern District of North Carolina, also has supported North Carolina’s HB2, particularly provisions that would have curtailed the rights of workers who believe they were fired due to racial, gender, or other types of discrimination.  He is better known for opposing the voting rights of African-Americans and misleading Senators about his record during his confirmation hearing.  He defended the North Carolina state legislature after it enacted a law with the discriminatory intent of “target[ing] African Americans with almost surgical precision.” In this case, North Carolina admitted eliminating voting on a Sunday before the election because “counties with Sunday voting in 2014 were disproportionately black” and “disproportionately Democratic,*” but Mr Farr maintained during his confirmation hearing that “at the time our clients enacted those laws, I do not believe that they thought that were purposefully discriminating against African Americans.”

In light of their words and actions, it is very unlikely that Duncan and Farr would set aside their extremist views and administer justice impartially to Americans who reside in the Fifth Judicial Circuit and the Eastern District of North Carolina.