This week, the U.S. House Judiciary Committee held hearings on HR 5, the “Equality Act.” This landmark legislation would provide non-discrimination protections to LGBTQ people and our families in a broad array of areas: employment, housing, public accommodations, education, and federally funded programs. It does so by amending existing civil rights laws to explicitly include sex, sexual orientation and gender identity as protected characteristics.

LGBTQ parents and families and the impact of discrimination on our children and other family members were front and center at the hearing. Three of the six witnesses in favor of the bill are LGBTQ parents who spoke of the impact of discrimination on their children, and a fourth, Carter Brown, spoke of the hardship his family faced when he lost his job after a work colleague outed him as a transgender man.

HR 5 is going to help improve outcomes for more than 437,000 children and young people in the child welfare system, over 120,000 children waiting to be adopted. We know that the opponents of marriage equality were greatly disappointed by the Supreme Courts historic pronouncement in Obergefell decision, which wiped away their arguments of course that if you allow gay people to get married it would destroy and erode the institution of marriage. Tell that to two of my nieces and my younger sister all of whom got married in straight marriages since Obergefell took place.

Obviously the expansion of marriage to include all of our citizens didn’t undermine marriage at all. But now they have trained their guns on a different site. They are saying, “Well these married couples should not be allowed to adopt children.” Currently ten states including Virginia across the river allow discrimination against same sex couples who seek to foster and adopt children. And two more legislatures today have bills pending before them to accomplish that same objective.

This is a profoundly troubling offense to the equality norm and to our nations commitment to children and to our young people. These states are placing the ideological commitments of some grownups over the practical welfare and happiness of tens and hundreds of thousands of children and young people. Think about that for a second there saying that they would prefer to have kids either not get adopted or placed in a foster home at all then to be with a lawfully married couple that they disapprove of. That is a remarkable thing and we are going to take care of that with the Equality Act.

So we have seen in some of these states the adoption levels go down because you are removing lots and lots of very qualified families that want to adopt. In fact one study showed that 70% of same sex couples want to form families and 40% want to do it through foster and adoption. Now why for the life of us would we remove them from the roster of parents who are ready to adopt, why would we do that unless you have bigoted and prejudiced ideas about the ability of gay people to parent and to form families. By the way those are bigotries and biases that are contradicted everyday by LGBT parents across the country.

Let me ask you Ms. Chandy about this, is this not a problem today that in many states or in some states it’s a minority of states but in some states that the LGBTQ community is being locked out of foster care and adoption. 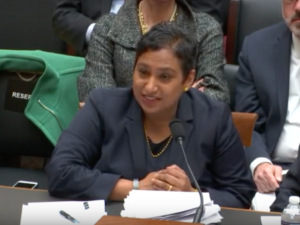 Of course turning away qualified LGBTQ foster and adoptive parents limits the pool for children. And I also want to make the point that this really is harmful for the children because 1 in 5 foster youth identify as LGBTQ and this takes away the chance that they might be put with an affirming family. And there are over 400,000 foster kids in America and we need to have all the families who are willing to be in the pool to take care of them. So I would just heartily agree with you that we cannot exclude LGBTQ potential parents from this. And as an adoptive parent myself, obviously I take this very personally to think that I would go to an agency and they would turn me away.

One LGBTQ parent, Jami Contreras, testified about the harms inflicted on our children when LGBTQ parents are discriminated against. Family Equality Council has documented such harms in numerous “Voices of Children” amicus briefs in marriage equality and other Supreme and Appeals Court cases impacting our families. Jami testified that when her daughter was born she was denied services by a pediatrician based on the pediatrician’s religious objections to her and her wife Krista’s same-sex marriage. The couple had done extensive research to find the best pediatrician for their child, and were eventually seen by another doctor they had not researched ahead of time and were left with questions, worries, and an intense feeling of failure. Rep. Sheila Jackson-Lee and Jami Contreras had the following exchange during the hearing:

Jami Contreras all of us have looked at that bouncing baby with such joy and I just want to congratulate you and I know that this child will be wonderfully beloved and as well accepting. Tell me how deep the pain was when that baby was rejected by a physician who takes the Hippocratic oath? 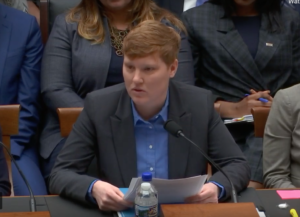 It is a pain that is indescribable and it sticks with me to this day and I think that is why I have to keep sharing my story to make sure it doesn’t happen to anybody else because it was horrifying. And th[e] question that really keeps me up at night and that haunts me and my wife, what if that had been an emergency? What if we were in an emergency room and that on-call doctor did not want to see us? …[H]ow long until we get another surgeon or an EMT showing up at our house? So, the Equality Act can finally give us a sense of peace of mind to just provide for our children and keep them safe like any other parent wants to do. 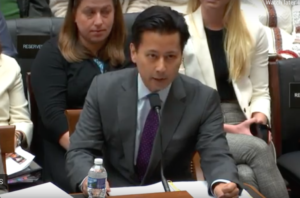 Kenji Yoshino, Chief Justice Earl Warren Professor of Constitutional Law at New York University School of Law and a married, gay man with two children, also testified today. Yoshino made several arguments in favor of the Equality Act. He shared statistics citing employment discrimination against LGBTQ individuals and spoke about the lack of evidence that LGBTQ protections would lead to safety concerns. Yoshino also testified that his family still feels unsafe traveling to certain areas of the country, and that they are subjected to acts of exclusion, saying:

I worry less about myself and more for my young children… I fear seeing the ominous clouds of inferiority begin to form in their little, mental skies.

Near the close of the hearing, Rep. Pramila Jayapal (D-WA-7) gave heartrending testimony about her gender non-conforming child who since coming out has a “new-found freedom” “to be able express who they are at their real core.” “My child is free,” Jayapal said. “We are talking about fear versus love…the Equality Act …make[s] clear that discrimination against LGBTQIA people has no place in our society.

Family Equality Council is proud to work with Congressman Raskin and other members of Congress to advocate for ending adoption discrimination against LGBTQ people, and is proud that during the hearing on HR 5, Reps. Raskin and David Cicilline (D-RI-1) cited Family Equality Council’s research and advocacy for LGBTQ families and for the Equality Act. We look forward to continuing to work with Judiciary Committee Chairman Jerry Nadler (D-NY-10) and Speaker Pelosi as they move HR 5 to passage in the House of Representatives.