My Tio’s Pulse started as a passion project that has become an incredible community initiative, involving over 30 individuals donating their time, services, and talent. Dedicated to helping children (and adults) who have been affected by Pulse, all profits from the sale of My Tio’s Pulse are being donated to help victims and families of Pulse.

About My Tio’s Pulse

My Tio’s Pulse by Keith A. Newhouse and the Friends of Pulse Orlando

Illustration from My Tio’s Pulse

Why are you crying, Tio Luis?

When Angel learned how to take his pulse in gym class, he never imagined the effect that his newfound knowledge would have on his Uncle Luis… or the conversations that it would start.

Using expert language from Psychotherapist Kenny Tello, who worked directly with children affected by Pulse and featuring illustrations by over 20 passionate artists, My Tio’s Pulse explains what happened at Pulse on June 12, 2016 in a clear and simple way that will give children the tools to talk about difficult topics and empower them to feel safe

When book publisher Keith Newhouse came up with the idea for Tio’s Pulse, shortly after the Pulse tragedy, he had no idea about the amount of support he would receive. He writes:

From the moment I told Carolyn Capern (CTS Agency) about the idea, she and business partner Greg 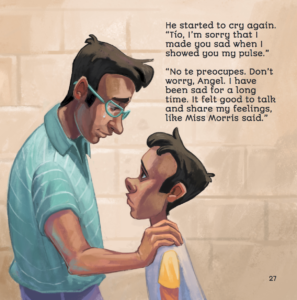 Illustration from My Tio’s Pulse

Trujillo have made connections and promoted to anyone who would listen! Joél Junior Morales and the Orlando United Assistance Center (OUAC) have been in complete support of the project and all profit from the book so far is being been donated to the OUAC. Kenny Tello, LCSW, CAP, CCTP, who worked with children who were affected by Pulse, gave us the words that we needed to discuss the tragedy in a way that wouldn’t overwhelm, but let kids know how to cope and feel ‘safe’ again.

Blue Star and Karen Brown threw us an incredibly successful launch party at the Orlando Come Out With Pride festival… My Tio’s Pulse was announced at the Launch Party and then read by Miss Sammy (Sam Singhaus) at the Lake Eola Amphitheatre with illustrations presented on the giant LED screen during the headliner hour of Pride.

Ethan Long, a successful children’s book illustrator introduced me to the Orlando GIANT Illustrators. Through the GIANT Illustrators and other artistic connections, we succeeded in meeting our Pride deadline (one month) of getting 20+ artists to each donate gorgeous professional illustrations that bring the story to life!

While working with the artists, I didn’t realize how big the Pride festival launch was going to be (it was originally described as a drag queen reading to 10-12 kids on a grassy knoll). I’d only planned to create the Kindle version, with no plan for print at that time. When I learned that we were headlining at Pride and that there was demand for a print version, I quickly contacted 40+ local printers and was told by a number that my turnaround time was “insane”. The next day, I received an email from Lynn DeScalzo of Fineline Printing saying that she needed to be a part of the project and would print our first 300 books (what I asked for Pride) at cost of just the paper (allowing maximum donation). Lynn and her husband (and business partner) Lee continued to go above and beyond keeping the special pricing for bulk orders forever as well as donating a banner and bookmarks for Orlando Pride!

My Tio’s Pulse can be purchased in print or on Kindle at https://www.amazon.com/My-Tios-Pulse-Keith-Newhouse/dp/1945493119/ or http://mytiospulse.com/.