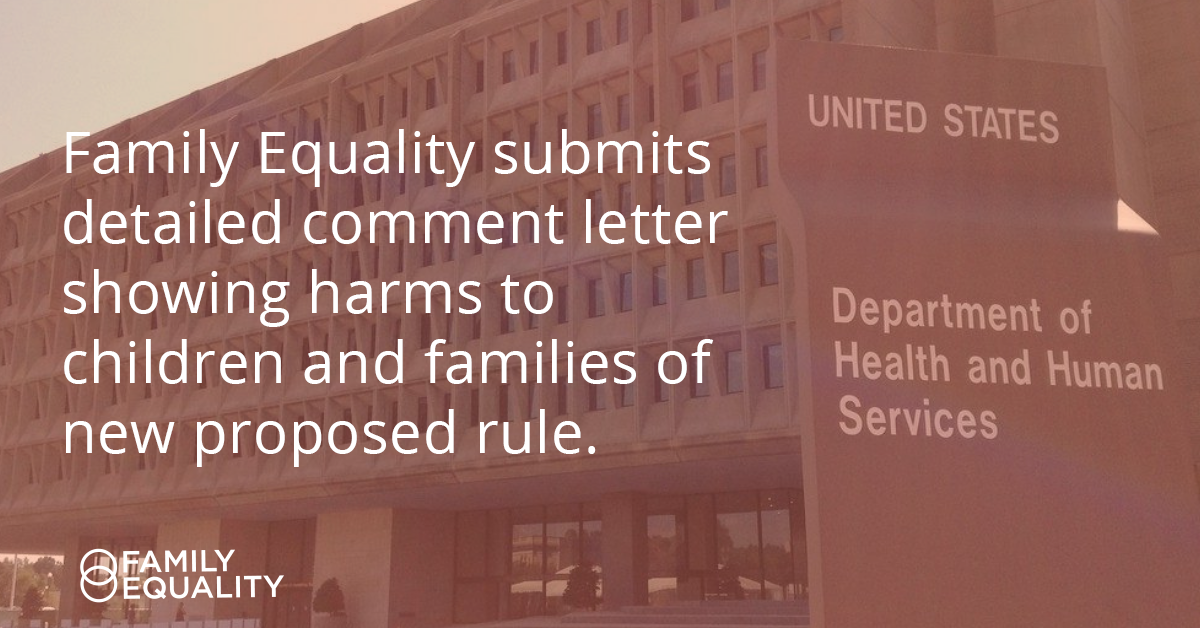 This week, Family Equality, along with four additional child welfare, LGBTQ, and policy organizations responded to a proposed rule by the Trump Administration’s Department of Health and Human Services (HHS) to eliminate data collection and reporting on the sexual orientation of foster and adoptive youth and parents by states, tribes, and child welfare agencies.  The detailed comment letter, which outlines the harms of such erasures of data collection on LGBTQ youth and families also urges HHS to collect gender identity data for these children and families.

The letter details the dramatic overrepresentation of LGBTQ youth in foster care.  One in five foster youth identify as LGBTQ.  LGBTQ foster youth suffer twice the rate of poor treatment while in care than their non-LGBTQ counterparts, and worse outcomes including longer stays in group homes, and greater rates of multiple placements, juvenile justice involvement, hospitalization for emotional reasons, being trafficked, and homelessness.  Dropping LGBTQ data collection makes it impossible to hold states, tribes, and agencies accountable for improved outcomes for these youth – and limits agencies’ ability to develop urgently needed service improvements for children currently in care.

The letter also points to the harms of eliminating data collection on the sexual orientation of foster and adoptive parents and guardians, and the need to collect gender identity data on these parents.  Such data collection could help ensure effective placements, higher adoption rates, and lower costs as children are successfully matched with affirming families.  Further, it would promote outreach to and recruitment of LGBTQ foster and adoptive families at a time when 123,000 foster children are waiting to be adopted, less than half of whom will be adopted in the next year.  Recent data from the Williams Institute shows that same-sex couples are seven times more likely to foster and seven times more likely to adopt than their opposite-sex counterparts.