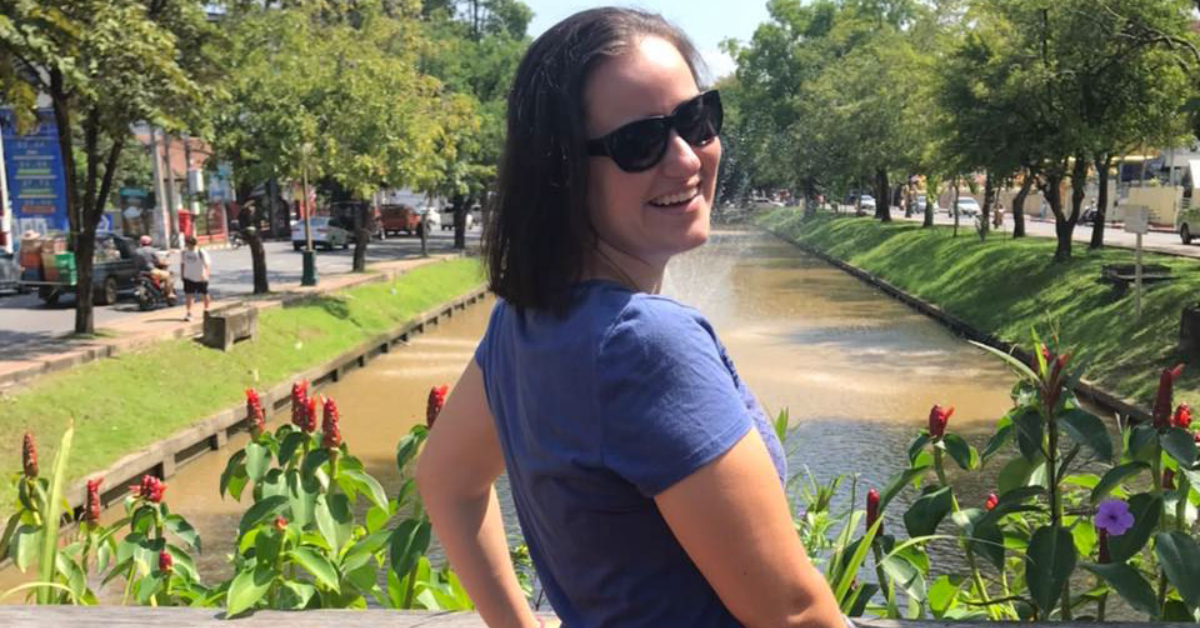 Sunday, May 3 marks International Family Equality Day, a time to celebrate family diversity in all its forms. To highlight this special day, we asked Speak Out member Maya Ulin-O’Keefe to share her experiences of being an LGBTQ+ person and a member of an LGBTQ+ family abroad.

I love traveling – I love seeing fascinating sites and beautiful landscapes, but I most enjoy meeting people, sharing adventures, and working on joint projects together. I love getting to learn about so many ways to live in the world, and because I value respecting other cultures, I seek to do this with acceptance, openness, and a willingness to honor local practices.

For me, traveling as a queer woman and as the daughter of two gay women creates some unique opportunities and obstacles. When Family Equality asked me to write about my recent experiences studying, living, and working around the world as part of their International Family Equality Day celebration, I spent some time thinking about the full range of my experiences in different cultures.

Prior to traveling to another country, I usually research the culture’s attitudes and national policies toward LGBTQI people. I find that a country’s laws impact people’s attitudes (and vice versa), however much variation exists across people in any country. One way most travelers connect with new people abroad is to talk about family, and photos open up terrific sharing opportunities. When I am abroad in situations where I am not comfortable coming out about myself or my two moms, I choose to present photos of my extended family where I can identify one mom and gloss over the many other relationships depicted. When I studied in India, a country that criminalized homosexuality (at the time), I used gender-neutral and plural pronouns to talk about my family. Before moving to Rwanda, a country that doesn’t criminalize homosexuality but highly stigmatizes it, I scrubbed my Facebook page of LGBTQI content, and I purposefully waited until I returned to the U.S. to “friend” my contacts there. When talking with less accepting people abroad, I sometimes choose one mom’s name for my stories about both women. A common question often arises: “what does your father do?” I usually reply, “I don’t have a dad” which generally ends the conversation. If pushed, I choose how to elaborate, depending on the audience.

Even when I am fully open about my family, I have found that people in many parts of the world, both humorously and frustratingly, simply cannot comprehend the idea of a two-mom family. My host in India was fairly cosmopolitan, but when I told her that I have two moms, she didn’t seem to understand and just “let it go”—seeming to chalk my words up to American confusion or weirdness. I later returned to India to work for an organization whose mission included decriminalizing homosexuality, and yet my co-workers there still did not understand “two moms”, but accepted my family descriptions. In rural South Africa, a country that legalized gay marriage in 2006, my host sister insisted one mom in the family photo must be my grandmother, despite my open explanation. This mirrors common South African family structures.

Misunderstanding my family is one thing, but in Rwanda, I encountered devastating homophobia. When I moved there to work for a fundamentalist Quaker organization, Friends Peace House (FPH), I knew I had to hide the truths about myself and my family. An important way for me to cope with the stress of being closeted here was finding Amahoro Human Respect (AHR), a local organization working with the LGBTQI community, street kids, women, and drug users.

Although my LGBTQI connections supported my mental health and grounded me while I was far from home, I felt like I was living “two lives” in Kigali, having to hide my AHR association from FPH. Despite my attempts at separating AHR from my FPH work and community, I was outed for volunteering at AHR. When FPH found out, I was told the crushing news that I had one week to leave my homestay and all the projects I was working on. Further, I was ordered to lie about the real reason for my sudden departure and I felt a cross-cultural obligation to honor this homophobic directive. For my own sense of integrity, I spent several days extensively documenting my many projects and contacts, so that these initiatives could move forward at FPH in my absence.

During this stressful time, my LGBTQI family at AHR supported me emotionally and took me in until I could find more permanent housing. Unfortunately, AHR staff had experienced similar exclusion in their lives and therefore understood, better than anyone, what I needed. For my remaining two months in Rwanda, I dove into projects for AHR where they sought my opinion, invited me to attend their inclusive church, and even connected me to stardom in a top 10 Rwandan music video. I left Rwanda having experienced significant life-changing highs and lows.

Being LGBTQI and from a two-mom family has led me to other wonderful experiences too. Some of the best times I spent abroad were in Brazil with my two gay “host dads” who were delighted when they heard about my two moms. They took me to visit many family members and friends, and together we went to family birthdays and some very raucous gay clubs in São Paulo. At one point I cut my foot and had to get stitches at the hospital. When the Portuguese-speaking front desk clerk asked for my father’s name, one of my host dads translated proudly, “She has two moms!”

Another cross-cultural adventure opened for me in Thailand because of my LGBTQI identity when I volunteered with OUTasia, interviewing interesting LGBTQI activists and posted LGBTQI news for OUTasia’s Facebook page. OUTasia even invited me to join Bangkok’s Pride Cruise up and down the main waterway of the city. I had a blast waving to everyone onshore and dancing with the scantily-dressed men on board!

Although I contended with the added challenges of navigating language barriers and unfamiliar cultural expectations, my international story may sound familiar to people living in conservative communities in the United States. I experienced intense homophobia as well as deep bonding opportunities one can only encounter as part of a marginalized group. I consider these small communities I have built all over the world to be my family. From my wonderful host dads in Brazil to my Rwandan LGBTQI family and my activist Thai and India friends, I feel enriched by LGBTQI people and other activists all over the world. Through sharing details about my family of origin and my own identity, I’ve found family on three more continents. I look forward to my next adventures abroad and more chances to make wonderful connections with LGBTQI activists and others.

Maya Ulin-O’Keefe grew up in the mountains of Asheville, North Carolina with two moms, a younger brother, and two dogs. She graduated from Bryn Mawr College and worked in Washington D.C. for a year lobbying Congress on international peacebuilding and conflict prevention. She spent the next two years working and traveling internationally. Beginning in high school, Maya has worked for LGBTQI+ equality all over the world. She has lived, worked, and studied on four continents and is excited to continue her international LGBTQI+ work. Maya enjoys playing soccer, curling up with good books, and running.