To mark Latinx Heritage Month, we asked our community to share stories about how their Latinx identities intersect with identity as an LGBTQ family. Here, Claudia Camargo shares the story of forming a family with her wife and childhood-sweetheart, Rosie, and the barriers they faced as an LGBTQ couple first in Mexico, and later in the U.S. 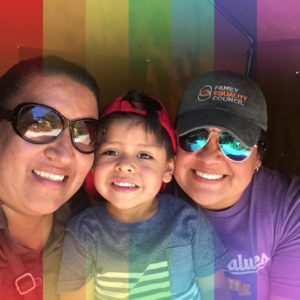 Rosie and I met when she was seven and I was five, during my first visit to Mexico to see my oldest sister and grandma. We became great friends — later growing into confidants — and in our late teenage years, we confessed our feelings for each other. The town she was born and raised in did not have a positive view of same sex relationships. Coming out at 21 (Rosie) and 18 (me), and confessing our desire to become a relationship did not go well. I had to bring her to the states in 2001, so we would be able to live together and be safe. Everyone but two family members shut us out, making it harder for us to make it through.

After a few bumps in our path, we moved in together in the town of Angola, Indiana. I left my hometown, Chicago, and my family behind, as all I wanted was to be next to Rosie. We purchased our home in 2003, and her family slowly started accepting that our relationship was not hurting anyone. 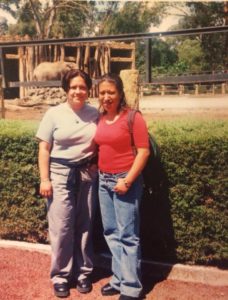 Rosie’s parents always asked when we were going to adopt or foster kids, but we didn’t think it was time; we still had so much to live of our love for each other. Due to some medical issues, we started looking at the possibility of Rosie carrying a baby. It was 2013 when we had our son Aaron. Rosie carried him in her womb and I carried him in my heart. Marriage Equality was a victory in June 2014; it was what we were waiting for all that time. On July 11th, I took Rosie on a hot air balloon ride to ask her to give me the joy of calling her my wife. On November 16th, we were married in a local chapel.

Now that we had the law in our favor, I was able to carry her and our son under my insurance. She was able to stay home and enjoy time with our son. I also filed to sponsor her to become a legal resident. In March of 2018, we received a letter with an appointment to go to the embassy in May for her visa. Unfortunately, her father passed away in April; she had not seen him in about 8 years. We left as soon as we could, knowing that she was not able to come back until her visa appointment was resolved. But her visa was not approved the day of the appointment, because they requested to see my birth certificate — even though they already had my passport and it stated that I was born in Chicago.

For financial reasons, I had to fly back in June. Explaining to my 4-year-old why I had to leave them behind was the worst situation I have ever encountered. We were apart for a month. This was hard for Aaron and hard for Rosie and I, as we had never been apart in our 17-years living together. I would always tell my son: remember that as long as you are in my heart and I am in your heart, we will make it through anything because we are a strong family. It is the same thing we would tell each other, Rosie and I, when we were those scared, young teenagers just wanting to love each other. We were able to close this chapter of our story in July 2018, when she received her visa and our little family was able to come back home.

I promised Rosie on December 5th, 1999 that I would be next to her, sitting outside on our porch rocking in our chairs when we were in our 70’s, remembering the path that got us there. Now I tell her we will be waiting for our grandkids to call or visit. Life has not been easy. But I would go through it all over again, as long as she is the person holding my hand through it all. Our story has changed some people. Now that they know it is not a phase, we are more welcomed in her hometown; I mean, what else can they do after almost 19 years? 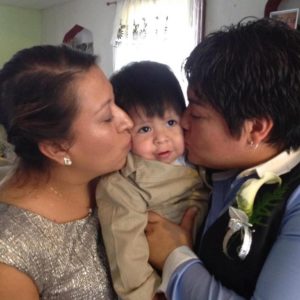