Kristie and I met ten years ago and knew right away that we wanted to become parents. Though it took us a few years, we were blessed in 2013 to welcome our daughter Olivia. We were married legally at the time in our home state as well as the neighboring state where Olivia was born. Up until the last minute I wasn’t sure if my wife would be allowed to sign the birth certificate as a second parent. Thankfully, she was. I shouldn’t have let my guard down, but I did then. So did my wife. Neither of us thought anything bad could happen to our family and we were even more reassured when marriage became the law across the nation in 2015. 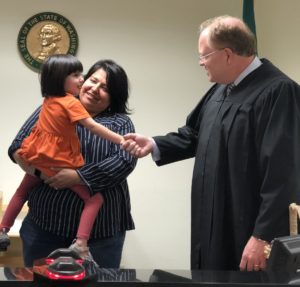 However, that same year we experienced a terrifying incident. During a trip to New Mexico to visit Kristie’s family, our daughter became very sick. We took her to urgent care and were met with belligerent opposition to our parentage. The admitting secretary demanded to know which one of us had given birth. We refused to answer, recoiling at the request. After all, why did it matter? She was on our insurance. All three of our names showed up together on the card. Meanwhile, our two-year-old was in the corner throwing up. I was livid, but my wife felt very helpless. Olivia ended up being seen by the doctor, but this left a very sour taste in my mouth about potentially living anywhere besides the Pacific NW.

“Our daughter became very sick. We took her to urgent care and were met with belligerent opposition to our parentage.”

Not long after that, Kristie’s company relocated its headquarters from Southern California to Texas, a state that ranks poorly in legal protections for LGBTQ families. Though my wife does not work at headquarters, we’ve always known she could be transferred there without much warning. Then, the final straw as we all know, Trump was elected. At that point obtaining a second parent adoption became increasingly urgent for my wife.

As she explained it to me, she needed to know that no matter where we lived or whatever happened to her, Olivia and I would both be protected under the full extent of the law. I’ve supported whatever she wanted to do from the very beginning but found myself getting angry until the adoption became finalized. I was furious that we had to explain to our four-year-old why we were going to court. I was nervous that it would cause her psychological harm to have her sense of security and understanding of her mommy being her parent challenged. I was disappointed with our lawyer’s lack of knowledge about how to handle a same-sex second parent adoption. Everything made me angry. It wasn’t until recent weeks that I started feeling scared though.

Reading about Trump’s unconscionable zero-tolerance policy that has ripped wailing, pleading parents and children apart from each other for indefinite periods of time, locking each up in jail cells, it all hit me like a ton of bricks. What could this administration do to our LGBTQ families? We ARE vulnerable. It’s not all rainbows and unicorns all the time. We don’t all live in states where we receive equal protection under the law. We don’t all have the safety of whiteness or passing as white. We are living in this liberal white bubble we call the Pacific NW, and I’m ashamed to admit I had forgotten my wife’s and my child’s very existence is challenged by racism and discrimination. And I’m even further ashamed that I thought child separation couldn’t happen again for the truth is my own wife’s living family suffered first hand the horrors of Indian residential school (and forced separation from family members). Then I thought about how our daughter is of mixed ethnicity. Her donor is Mexican. What if his parents had been detained, locked in a cell, returned to their home country when seeking asylum? Would our child even exist?

“We should not have to fear whether or not our families could be separated, whether or not we will have the full protection of the law regardless of who holds the office of Presidency.”

Dropping my daughter off at daycare this morning, we followed our daily ritual. We walked into her classroom, we put her lunch bag in her cubby, washed hands, walked back to front door together side by side. I picked her up, squeezed her tight for a hug, cuddle and kiss precisely in that order. Placing her back on the ground I walked into the hall and around the corner, peaking my head back around to blow her one last kiss. We locked eyes, told each other “ I love you” and I left for work.

I grieve deeply for all the parents just like me or you, who will never get to experience these simple daily rituals again with their children. More than ever, I am emboldened to fight like hell to make sure families can stay together, safely and humanely. We should not have to fear whether or not our families could be separated, whether or not we will have the full protection of the law regardless of who holds the office of Presidency. I implore you to join me, to hold my hand and fight alongside me. We will NOT let this be our legacy. Our children deserve better. Love makes a family, and families belong together!