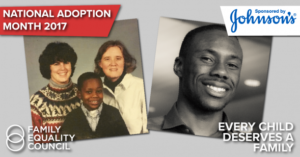 “In 1992 Janet Simons and Mary Hynes, two white women, were looking to adopt, and visited me at the orphanage my mom had given me to. Two months later I went home to live with them.”

My birth mom has schizophrenia. I spoke to her recently. It’s hard for her to be fully “there.” The same was the case 28 years ago, when I was born. I don’t know what I was like as a baby, whether I cried, or laughed. I have never seen my baby pictures. However, I know that my mom loved me, so much so that she was willing to risk seeing me go home with another family. In 1992, that is exactly what happened. Janet Simons and Mary Hynes, two white women, were looking to adopt, and visited me at the orphanage my mom had given me to. Two months later I went home to live with them.

In DC, and in the 1990s, two moms raising a black son was rare. There were challenges that many parents just weren’t prepared for. Colorblind rearing of minority children wasn’t a frowned upon practice at the time. In fact, it was often THE practice.

When I was 5, I learned that I wasn’t so crazy to believe the latter. My birth mother, along with my Grandmother and my birth father, all filed a challenge to my adoption. Soon after, a panel of 3 judges overturned my adoption on the grounds that a white, same-sex headed family wasn’t the right household to raise a black child in. We fought the decision all the way to the Supreme Court. It was not heard, and was knocked down to the lower courts, who decided upon a joint custody agreement between my birth family and my two moms.

My mom Mary, who had filed for sole adoption in part because of fears of prejudice against gay couples, was stripped of her adoptive parent status. She, along with Janet, would now be my legal guardians, technically eligible for many of the same rights as adoptive parents, but lacking in title, and in some standard parental rights. I became a ward of the state, technically a son to no one in the eyes of the law. I would still live with Mary and Janet, but I would be required to visit my Grandmother every other weekend.

However, despite all of this, my moms and I remained strong, powerful, together. That’s why it was so heartbreaking when my mom Mary was diagnosed with colon cancer. She died 4 years later. She was 37. I was 11.

My life and my adoption story changed. Now there weren’t two different moms picking me up from school. Now I only had one white mom. Now I could cover a part of my identity if I wanted too. Now I got to choose which people I would tell I was adopted to. As I grew older, the grief I felt about Mary’s death defined me more than my adoption story. I worked on becoming a better person each year, but I failed to embrace the weight of my place in the world as a black man raised by two white moms. I did not realize what it meant to “be myself.” I thought I had to try to be a chameleon to fit in with everyone.

What I realized, is that for me being myself meant standing out. Standing out, and sharing the perspective I have with the world, makes me feel special. Sharing that perspective with other adoptees, adoptive parents, foster youth, and friends makes me feel that I am doing something to impact someone else’s life in a positive way. I love who I am. I love my moms, and I love my story. You don’t have to try to fit in to different worlds to be successful. You just have to be comfortable enough in your own skin to venture into them.

Tony Hynes was born in Washington D.C. He currently lives in Takoma Park, Maryland. He obtained his Masters Degree in 2013 from the University of Maryland, Baltimore County, in the field of Applied Sociology, and wrote his thesis on the psychological well-being of the child within the Same Sex Household. He currently teaches children with Autism at James E. Duckworth Elementary School, in Prince Georges County Maryland.

Tony Hynes is a new author. His book “The Son With Two Moms,” is a memoir covering his life growing up with his two moms. The book talks about some of the struggles his family faced as a transracial, gay headed household in the early 1990s. Tony was taken in by Mary Hynes and Janet Simons before the age of 3, but was not adopted until he was 19 years old. Up until that time he was a foster child, with Mary and Janet serving as his legal guardians. “The Son With Two Moms,” discusses the custody battle between his biological family and his two Moms, and documents how his life changes when one of his two moms dies of cancer.