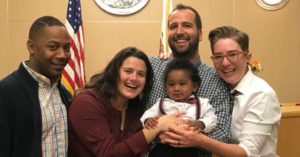 “At only two short months of age he’d already had a whole life before we ever entered the picture — beginning with nine months in his first mother’s womb and continuing with social workers, cuddlers, doting nurses and doctors, lawyers and judges who made regular visits to this very courtroom… ”

It was the first time in my 36 years of life that I’ve set my alarm for 5am and actually gotten up right when it went off. No snooze button. My parents were staying at a nearby hotel, my mother-in-law and sister-in-law were in the airbnb below our apartment. Everyone had driven from afar or flown in. No one was about to miss the day that this beautiful, perfect little person joined our family for good.

Only one thing made this day look a little different: the camera crew following us every step of the way. We had been documenting this journey for nearly two years — from the moment my wife and I decided we were going to build our family through fost-adoption, to placement with the boy who we would forever call our son. The resulting series is The F Word: A Foster-to-Adopt Story.

The social workers had taken off work to be here. That really stuck with me. The social workers who had worked overtime to make sure this baby had a forever family had to ask for time off to attend our finalization hearing. I mean, c’mon. These professionals are making the toughest decisions day in and day out, hedging their bets, living with the pain and confusion and discomfort of everyone involved. Social workers are warriors on the front lines of a war that shouldn’t have sides to begin with, that at its best doesn’t have any sides at all, yet they had to take off work to be here. And all we had to offer them were some mason jars filled with Hershey kisses because my wife wanted them to leave remembering the sweetness of the day.

We entered the same courthouse we had entered four months earlier to witness the termination of our son’s birth parents’ rights. There’s no way to describe the complexity wrapped up in the feelings of that day. I remember texting a good friend with the news. Reading her response I broke down because she reflected my internal angst so beautifully: “I don’t want to cheer… but I’m glad that you guys are on your way.” A TPR is nothing to cheer. It’s in fact on many levels something to grieve, for the sake of your adopted child.

When everyone arrived and we moved inside, we were instructed to pass through the metal detectors. It is a courthouse after all. “Step right up, strip down, become a family,” I imagined the security guard joking, though he was actually beaming with smiles and making the whole routine as warm and love-filled as humanly possible.

J’s guncles (and our closest friends) arrived fashionably late. They’re gay, that’s what they do. Then we all sat in the lobby and waited. The wait felt long. Like 20 days long, not 20 minutes long. When the judge was finally ready to see us, Kristan, J and I were ushered to a large wooden table at the front of the courtroom. The judge, noticing J’s need to chew on something, handed him a highlighter and he immediately went to town on it.

Kristan looked straight ahead, trying to hold it together. She cries a couple times a day — at commercials, at J eating an apple, at her inner thoughts. I find it deeply charming, but today she didn’t want to cry. We held hands tightly, with J snuggled between both of our laps. The judge said words that are now a blur while J drooled all over the documents we were supposed to sign. When the judge congratulated us, Kristan finally looked over at me and realized I’d been sobbing the whole time, so she let the waterworks loose.

“We saw so clearly in that moment that before we ever arrived on the scene, there was a real community looking after J.”

After it was all made official, the county social worker handed us an album of J’s birth photos. The hospital had given it to her. We held the album like it was made of gold. We saw so clearly in that moment that before we ever arrived on the scene, there was a real community looking after J. At only two short months of age he’d already had a whole life before we ever entered the picture — beginning with nine months in his first mother’s womb and continuing with social workers, cuddlers, doting nurses and doctors, lawyers and judges who made regular visits to this very courtroom, a courtroom that I would probably never see again but would remember forever — the cracks in the wood, the smell of wax from the linoleum floor, the long, elegant windows in the lobby that allowed you to see every single person who entered and exited the building. We knew that people experienced the darkest moments of their lives in this lobby and the lightest moments of their lives in this lobby. This lobby held so many stories it could burst.

Nicole Opper is an Emmy®-nominated filmmaker who directed and produced the feature documentary Off and Running, an Audience Favorite at Tribeca and winner of ten international awards including Best Documentary at Outfest and Best Documentary Screenplay at Silverdocs. The film was nationally broadcast on P.O.V. in 2010. She received a Fulbright Fellowship to direct Visitor’s Day which is supported by New York State Council on the Arts, Chicken & Egg Pictures and The Independent Television Service. She’s also produced films for The Discovery Channel and Here TV, and was selected for Filmmaker Magazine’s annual “25 New Faces of Independent Film”. Nicole has taught filmmaking at Stanford University and San Francisco State University, among other schools.

Our Adoption Story: On This Night, We Eat Pizza